The April 15, 1775, issue of the Virginia Gazette contains the following notice of the opening of the Pasteur & Galt Apothecary Shop in Williamsburg:

«The Subscribers having this Day entered into Partnership, beg leave to acquaint the Publick in general, and their Friends and Neighbours in particular, that they intend practicing Physick and Surgery to their fullest Extent, and that they intend also, as soon as the Situation of the Times will admit, to keep full and complete Assortments of Drugs and Medicines, which they will endeavour to procure of the very best in Quality, and will take Care to have them fresh by making several Importations in the Year. It is proposed that John M. Galt shall pay his particular Attention to Surgery, to whom our Friends are desired to apply on all such occasions, but will be advised and assisted by W. Pasteur in all difficult cases. They both desire to make their most grateful Acknowledgements to their Friends and Customers for the many Favours and Civilities they have received, and hope, by this Union, they will be enabled to carry on their Business to the entire Satisfaction of their Friends; as, on their Part, the strictest Assiduity and Attention shall be observed.» PASTEUR & GALT 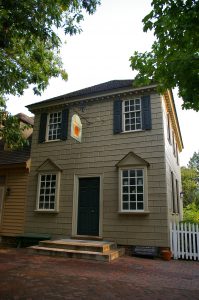 Perhaps Pasteur and Galt looked on the combination of their efforts in the little business near the Capitol on Duke of Gloucester Street as a likely way to improve their incomes by reducing their overheads. Six days later the Revolution all but began in Virginia with the theft of gunpowder from the Magazine. The partnership lasted until 1778, at which time Pasteur retired from medicine. Galt continued in the business. Their reconstructed shop stands today where the original once did. It is stocked and furnished much as it was then, down to copies of Galt’s medical certificates hanging on the walls.

Dr. William Pasteur established his first Williamsburg shop in 1759. He had apprenticed under Dr. George Gilmer, Senior, of the town, then studied in London for about a year at St. Thomas’s Hospital.

Dr. John Minson Galt had attended the College of William and Mary before serving an apprenticeship in medicine. The apprenticeship was followed by a year at St. Thomas hospital in London. In addition, he had trained under London’s eminent Hugh Smith and attended lectures on midwifery by Colin McKenzie. He returned to Williamsburg and opened his apothecary in 1768.

Tools for preparing and mixing medicines, for bleeding patients, for surgery, for setting broken bones, and for extracting teeth were close at hand in a colonial apothecary shop. Medicines were either stored as raw materials in drawers or cupboards, or mixtures of the raw materials were prepared and stored ahead of time, sometimes in very decorative jars. These raw materials and compounds could be purchased, often with the patient bringing in his own containeer to hold the ingredients for the trip home.

Most of the mystery and art of the apothecary was in mixing the raw ingredients of the potions he prescribed, but his stock in trade might range from groceries to bedpans. The advertisement of another Williamsburg apothecary, printed in September 1774, promised a fresh assortment of drugs and medicines in addition to:

Galt advertised Keyser’s Pills in August 1772 with testimonials from four dukes and a lord. They cured “Rheumatism, Asthma, Apoplexy, Palsy, Giddiness of the Head, Dropsey, the Sciatica . . . Diseases of the Eyes . . . and afforded vast relief in the Gout.” They also combated a complaint called “the Flour Albus” and effectively removed “Every Appearance of a Certain Fashionable Distemper.” Discounts were offered for purchases in quantities larger than a dozen.

Among Pasteur’s patients was Governor Botetourt. With Dr. John de Sequeyra of the Public Hospital, he treated Botetourt in his final illness in October 1770. They diagnosed his sickness as “a bilious fever and St. Anthony’s fire.” Pasteur remained in practice until 1778.

During the Revolution, Galt became a military surgeon and served as director of the state apothecary until 1780. In 1795 he became a visiting physician to the Public Hospital, then was appointed to its court of directors, serving in both capacities until his death in 1808.