John Pasteur, Charles Pasteur and wife, came to Virginia in 1700, on the fourth vessel with Huguenots – name of Ship Genevois [1] having 23 passengers only, 3 were Pasteurs. They were sent up James River to Manakin town near Williamsburg where 700 Huguenots were settled. 1707: some of these Huguenots went to N. C. on Trent River near where Newberne is now. 1709: a German Baron [2] came in possession of a large Grant of Land covering Craven Co. N. C. He placed on it a large number of German emigrants where the town of Newberne is now which they named – but Indians soon drove them away and the Baron sold his possessions to Col. Thomas Pollock an English emigrant who was a great uncle to Bishop Polk of Louisiana now deceased. 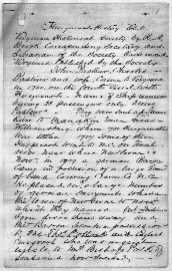 The name Pasteur is now invested with world wide special interest through the recent scientific discoveries of the eminent French chemist in alleviation of the dread malady Hydrophobia.

A curiosity as to his descent may be pardonable. It may be that he springs from the same conscientious strain as the refugee of the Text. Rev. James Pasteur appears as lecturer for Norfolk Parish Norfolk County in 1754 (See Perry Church papers of Virginia, page 413).

William Pasteur a descendant in the second generation probably of the refugee was in 1752 an apprentice to Doctor George Gilmer Surgeon Physician and Apothecary in Williamsburg and the ancestor of the distinguished Virginia family of the name – served as a surgeon in the Virginia line during the Revolutionary War. 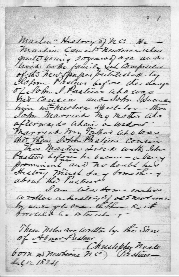 1785: I see in Wheeler’s history of N. C. Charles Pasteur was sent to the Legislative from Halifax town. The County of Halifax and town had several Pasteurs and they married and intermarried with the Jones, Longs and Ferrers – I think John I. Pasteur’s family were from Halifax Co.

I see in Wheeler’s History of N.C. a letter written by Gov. Richard Dobbs Spaight to John Stanley a challenge to fight a duel:

Sir yours of this date has been read my friend Doct. Edward Pasteur will appoint the time and place make the other necessary arrangements with your friend.

The duel was the next day. Gov. Spaight was killed. Your great grandfather was the second in the duel.

John Iredell Pasteur who married his cousin Betsey was Editor and proprietor of the Newberne Spectator newspaper. He was also a conspicuous military man. John was also a cousin of ours.

1846. When the Mexican war broke out the Gov. of N.C. appointed John I. Pasteur Commander of the N. C. forces and he was getting ready when he died suddenly with apoplexy while drilling his officers at the old Theatre in Newberne.

1814 or [18]15. Privateer letters were insured Doct. Ed Pasteur and others and they fitted up a vessel by name Snap Dragon. John I. Pasteur was on that vessel they made a good many captures and valuable prize which went to Doct. Pasteur’s friends.

John Pasteur had a sister who had three children, 2 girls and one boy, he was about my age, Mr. Frederick Lent. The girls Marry and Eliza died. Fred D. Lent [who] graduated 1845 at Chapchill N.C. He afterwards graduated as physician in Philadelphia. He married at the north. Made a fortune and quite a reputation his home was called Spring N.Y. Now dead.

The Rev. James Pasteur fell dead in a pulpit in an old church where he preached in Williamsburg Va. His tomb was seen by James Pasteur who was going to school at William and Mary College – James is Helen’s uncle. Some time in 1849 or 50 one of his school mates Robert Armstead was walking with him in the grave yard and called his attention to the name Pasteur in the Slab. Armstead told me this 1852 at Point Clear Ala.

After Thos Jefferson Pasteur moved to Florida he wrote a letter to me telling me how many children. I think he said 7 girls and two boys. The boys were then dead.

I am the oldest Pasteur now living. I am the last of 11 children my father had. The Pasteurs were short lived persons, heart disease and apoplexy has taken them all off.

Mr. Holmes may find some of these books at his school library.

He – Martin – came to Newberne when quite young, 20 years of age, and lived in the family as compositor of the newspaper published by John Pasteur before the days of John I. Pasteur who was his cousin and John I. succeeded him in the Newberne Spectator. This John married my mother who afterwards when a widow married my father who was then John Pasteur’s cousin.

This Martin lived with John Pasteur before he became a key prominent man and no doubt his history must say something about the Pasteurs.

I am told someone has written a history of old Newberne. Try and get one, I think it should be interesting.

These notes are written by the son of Abner Pasteur.

From the Holmes Papers, #1525, Southern Historical Collection, The Library of the University of North Carolina at Chapel Hill.

Note from the Editor
[1] The name of ship was not “Genevois” but “Nassau”, Captain Tragian commanding, having sailed from Kensington in London in1700 with 150 passengers, all Huguenot refugees.
[2] The Baron Christoph de Graffenreid, a Swiss (not German) nobleman, had secured a large grant of land in the English colony of Carolina. Thousands of Germans from the Palatine District immigrated to America at this time in history, de Graffenreid’s little group of Swiss, were just joining the throng. [Source: Descendants of Johann Simon]