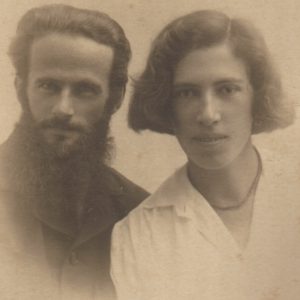 Paul Emile Pasteur, a Swiss national, was born on 7 October 1884 in Montreux, in the canton of Vaud, Switzerland. Full of resources, talent, energy and in tune with social reality, Paul Emile Pasteur accomplished an admirable missionary work in his lifetime on the religious front (training of indigenous pastors), on the cultural front (teaching of technical and general knowledge) and on the material front (construction of buildings, raising crops and livestock).

He was a self-taught man, open to avant-garde methods, with a strong personality but no diploma, an artisan missionary without any real decision-making power, a man of the ground, good at many varied tasks executed with patience and determination. He was subject to the disdain, condescendence and criticism of those who had undertaken further studies and who had a diploma to their name.

Paul Emile was only 10 years old when his father died. He left school at 14 since his mother could no longer pay for his studies. He apprenticed himself to the Montreux Topographic Service as a draughtsman, then worked as an industrial draughtsman in Geneva, Paris and London until 1912.

An active member of the YMCA, he decided to go on a mission trip in 1913 with the Paris Evangelical Missionary Society (SMEP). They sent him to Gabon to head up their Ngomo station on the banks of the Ogooué River (downstream of Lambaréné, where Dr. Schweitzer had established his mission). He worked hard and with great enthusiasm at his new tasks of logging, teaching and evangelism. But he had to leave suddenly two years later due to a double pleurisy for which he had to undergo three consecutive operations and a long convalescence. He put this time to good use by studying medicine and nursing.

In 1919 he married Hélène Félix, a Montessori-trained teacher, who worked at the St Prex Elementary School. A month later both boarded a ship for New Caledonia where the Paris Evangelical Missionary Society had asked them to substitute for Maurice Leenhardt in his absence at the Do Neva station. While his wife and another teacher, Hélène Capt, taught the women and children, Paul Emile Pasteur taught the catechumens and future natas (indigenous pastors); supervised the station’s building projects; revived the raising of crops and livestock, thereby providing for the needs of the Do Neva station; repaired and built classrooms and dormitories; and trained artisans. The Do Neva “old school” started by Paul Laffay, who died in the 1917 war, was finished by Paul Emile Pasteur and students whom he had trained for this purpose. It took a long time but he knew how to turn this project into an inspiring teaching tool. It was built entirely with indigenous labor and is considered by today’s Protestant community as its first school. It suffered from the vagaries of time and weather, and was restored in 2003 during the 100th anniversary of Do Neva and is now part of the territorial heritage.

Edouard Benignus, a pastor in Nouméa, supported him in his work. They travelled on horseback, visiting and preaching the gospel to the tribes in the east coast and north of the Grande Terre.

Upon his return to Do Neva in December 1923, Maurice Leenhardt sent Paul Emile Pasteur to reorganise the work in the old missionary station in Ro, Maré. It had been established by English pastors from the London Missionary Society in 1841 but no longer had a resident missionary since pastor Delord left in 1911. Accompanied by their two daughters, who were born in Canala and Houaïlou, Helene and Paul Emile Pasteur arrived in Ro in April 1924. It was very hard work. He had to repair the old printing press to print local missionary texts, one of which was the New Testament, in Nengone, the language spoken in Maré. He gave pastoral, educational and vocational training; and provided care, with the help of devoted missionary nurses, for the lepers, who were numerous at that time. In July 1924, Hélène Pasteur gave birth to their third child, a son.

At the request of the Paris Evangelical Missionary Society, but against the will of Paul Emile Pasteur, he left Maré with his family and went back to Switzerland, after working for six consecutive years as an artisan missionary and faith worker in the mission field.

Once back in Switzerland, he had only one thing on his heart: go back to Maré to finish the work he had started, which had been unduly cut short. His project consisted of caring for lepers, but more specifically, “to organize and establish, through the help of the elders and the youth, a hygiene and prophylaxis service in the areas where the lepers live.” He drew up plans for an ideal leper village that was best suited to local circumstances and to the desired goal, a care center with a school, workshop, boarding school, dispensary and a service to facilitate the lepers’ reintegration into working life. He also sought to address social issues and to instruct the population, an attempt at civic education which would “raise the dignity of the native by freeing him from European tutelage.

To this end, he launched a subscription, created a support committee, “The Work in Maré” and multiplied his contacts. He collected donations; gave conferences using “light projections,” a forerunner of slides, of his watercolors of Maré; organized the sale of postcards of New Caledonia flowers which he himself painted; wrote and published a newsletter… When he was ready to leave, having collected all the necessary funds and resources thanks to the network of solidarity around him, Paul Emile Pasteur had to renounce his most cherished dream due to the refusal of the French Colonial Office. “I looked for men of vision; I found men content with their position,” he wrote in his diary in March 1927. This painful failure did not deter him from fulfilling his unrelenting desire to return to where he had given most of his life. He was concerned for his 4 children – his youngest daughter was born in Lausanne in 1926 – to have the education he himself did not have. His constitution could no longer stand the cold Swiss winters. These considerations made him move the whole family to New Caledonia, where they spent several years in Maré before settling in Nouméa, where he died in 1951 at the age of 67.